Lower your cost of goods. General chemicals and high purity solvents for less.

Is the comeback of coal on the horizon.  As many of you have seen President Trump is working on repealing some of the clean air act  laws that lowered the emission rates of CO2 which mainly effected coal fired power plants.  As many of you may also know the large coal and energy companies in the United States do not have the capabilities to test many of their coals in house. This is where specialty laboratories perform in house testing of coal samples and provide those analysis back to the companies requesting testing.  Some of these tests such as the sink and float analysis are tried and true methods that have been used for the past 50 years to analyze coals.  Two of the main materials used in sink and float analsysis are dibromomethane and perchlorethylene.  These are both what are termed as halogenated solvents and are both very dangerous to work with and have been known to cause cancer. This is one reason why RightPath Industries makes all of our customers using halogenated solvents require the filling out of a user agreement form to ensure that staff is properly trained in how to handle the materials.

The main reason for the slow demise of coal over the past few years can be viewed as two fold.  One being the clean air act which caused a significant disruption with competitive energy companies in having to provide new scrubbers to be below the new EPA limits.  The second and perhaps the main reason is rise of fractal drilling and the marcellus shale gas reserve. Coal testing laboratories are also feeling the burden of lowered coal usages. There has been a reduction at coal testing labs by over 70% in the past 3 years. Many coal testing labs have since gone out of business due to the low sample request by energy companies. 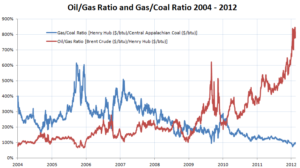 As you can see in the above figure in 2012 Natural gas in 2012 became the predominant source of energy for the United States surpassing coal.  This is mainly due to the large natural reserves and lower costs associated with extraction of coal from the earth utilizing techniques such as fractal drilling which drive the cost down considerably when in comparison with coal.

We believe that while the clean air act redaction might help in the short term for some coal fired power plants overall due to the large and cheap supply of natural gas moving forward coal production and with it ancillary markets and employment in the coal sector will continue to suffer.

As many of our customers in coal country there are still opportunities utilizing current infrastructure in many of the laboratories across the country.  Many coal labs already contain the required staffing as well as testing equipment needed to begin operations in environmental as well as analytical testing services.   If you are looking to make the switch please feel free to contact RightPath Industries and see how our team of experts my be able to help you.